The previous owner of our new house left a few things behind.

There was a random handful of items that could be labeled “The Stuff People Usually Leave Behind, Mostly In That Little Cabinet Over the Stove.” The cheap tealight votives. Bottle of lemon extract. Expired green tea.

Then there’s a teeny, tiny sake cup. Not much bigger than a thimble.

Did she ever drink from it? I imagine her on a blind date. She’s 51 and hasn’t dressed up in a long time. She keeps pulling at the front of her dress because it’s too tight and gaps open between the top two buttons. Her paper napkin is wadded up in her left fist and her orange chicken is sitting untouched in a puddle of cooling, sweet goo. She keeps her ankles crossed.

Her date talks without stopping, shoveling forkfuls of rice into his mouth. A single grain is stuck to his chin. She can’t stop staring at that grain of rice. She wants to reach over the table and flick it away. She brushes her hand across her own chin, in a hopeful gesture of telekinesis. She can’t hear what he’s saying. There’s nothing but that grain of rice, bobbing up and down with every chew.

He finally gets up from the table. He hikes up his pants as he strides toward the men’s room. She is filled with relief. He’ll see the rice in the mirror, surely, and it will be gone when he comes back. She shifts in her seat and passes her wadded up napkin from her left fist to her right. She glances around at the neighboring tables, exhales.

The waitress fills the water glasses from the large plastic pitcher, but it’s mostly ice, and a piece escapes mid-pour and slides across the Formica, coming to a stop at the bottle of soy sauce. Next to the soy sauce is a little sake set, empty. It looks like it’s been there a long time. Maybe it’s decorative. She picks up the tiny sake cup. It fits loosely, upside down, over the tip of her index finger. She let’s it hang there, and wonders at its size. She’s never tasted sake. It must be very strong, if this tiny cup is a serving.

Beyond the dangling cup, she sees her date walking back from the men’s room. He takes long, obnoxious steps and swings his arms in a way that makes people in the booths lean away from the aisle. From yards away, her gaze narrows on his chin — on a small, white pinpoint. The grain of rice still hangs there. Without thought, dipping her hand below the table, she drops the sake cup into the side pocket of her red patent leather purse. As her date rolls up tableside, she rises, pats her hair, slings the purse over her shoulder, and thanks him for a lovely time. 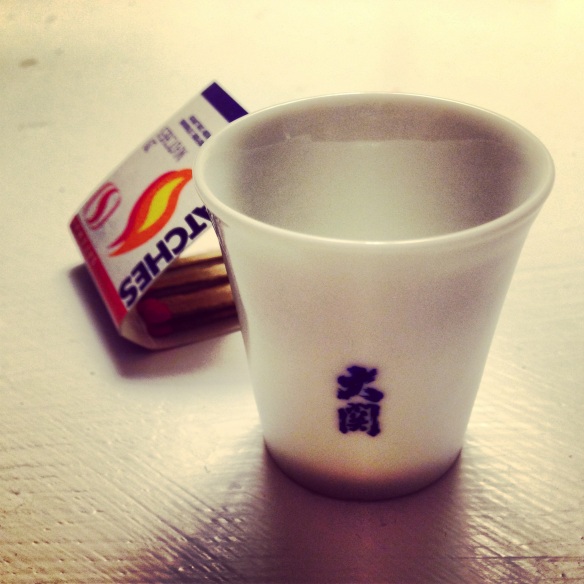 The landing pad for our leap of faith is a lovely rental. It has huge windows. The sun pours through them and slides across the floor and slips onto my lap on the couch and … oh. The sun. The slices of blue sky I can see from said couch. The frosty white, massive popcorn clouds. The sunsets that just don’t quit.

Our rental also has a sweet gas fireplace, open kitchen, vaulted ceilings, and it’s two minutes from our daughter’s school.

But. It has three bathrooms. This does not go into the “pros” category. There are only three people in our family, and one of them is only 42 inches tall. We do not need FIVE bathroom sinks. Double vanities, you know. For crying out loud. Just stocking the toilet paper takes me ten minutes. I’ll pass.

And it has no yard. People think I mean it has a tiny yard. But it really has zero yard. Well, a strip of grass next to the driveway. It’s in a development planned for high density, or some such, with a communal driveway and garages that all face each other off the back of the houses. The front door opens toward a perfectly smooth, new sidewalk (and those spectacular skies. Did I mention those?) — and a really busy street.

So we moved to a town where the outdoors are glorious, but we can’t actually BE outside at our own home. For a natural born couch-lounger like me, this is deadly. I need a backyard, or I don’t leave the upholstery. And for a kid like ours, who runs up mountain trails with glee, it’s the same thing as confining a border collie to a studio apartment in the city.

Also, I think I mentioned a wistful hope for chickens? Yeah.

Needless to say — when we landed here we knew we wanted to shop for our next house right away. We wanted to get settled. To start layering the memories. To Be Here Now. Top on our list of requirements: a big yard. Also: something newer than 1940, but older than 1980. Two bathrooms. (Just two.) A garage. Not too many projects required — just enough that we could put our stamp on the place. And oh wouldn’t it be great if we could buy at a price that allowed us a full down payment from our little nest egg, plus some leftover for improvements.

First reality check: big yards are fairly rare in this outdoor mecca. Weird. People say it’s because “the whole region is your backyard!” (true) and “our playgrounds are so new and beautiful!” (true) and “oh, they developed the new neighborhoods to bring everyone out front, together — it’s a community building feature” (puhleeze) and even “you’ll be surprised at how cold it gets in the winter. You won’t go outside that much.” (Wait. What? See number 1.)

After much searching, and much indignance at chicken-dream crushing HOA covenants, we discovered what seems to be one of the only mid century neighborhoods in town. That is to say, there are plenty of houses built in the mid century scattered around the area. But this neighborhood was actually a planned, developed area in the early ’60s — and it’s full of low-slung ranches, clerestory windows, entryways — and huge yards.

We refreshed listings obsessively for about a month, and there it was. The house. It hit 89% of our wish list–for starters, a 100×90-foot lot that spaciously holds about 14 towering juniper trees. Also, two bathrooms, three bedrooms, and a super fabulous brick fireplace. And the place was bank-owned. Which means, do a super-thorough inspection (you get it as-is) and expect a lightning-fast closing. And a three digit mortgage, ohmygod. The windows were all way too small, and the chain link fence would have to go, but it was obviously the one.

We closed on November 16. My Pinterest boards suddenly had a place to manifest. Chevron area rugs! Lovingly organized kitchen drawers! Hall closets converted into adorable reading nooks! Industrial-chic pendant lights! It was going to be so much fun!

After ripping out the carpet and tearing down the kitchen cabinets and hiring a contractor and painstakingly designing custom cabinets only to hyperventilate over the $8,000 estimate (CANCEL) and going into shock over a plumbing bill and shouting at each other about the electrician’s schedule and postponing giving notice to our landlord AGAIN, this is where we are: insulation and drywall is up. Mudding, texturing, and coating the dining room’s popcorn ceiling is “almost done.” Next is painting, flooring, kitchen cabinets (IKEA), kitchen sink, bathroom vanity, bathroom tile … and so on.

We have five weeks until moving day.

To be fair, project creep was actually fairly minor, but holy hell all of this takes a lot longer than planned. And is way more expensive than even our best, semi-experienced guesses imagined. (This is where my little brother presses his lips together and gives me the “I told you so. Nobody ever listens to me.” look.)

I can now identify wood species at a glance. See, the Big Thing, the Main Vision for this place was to remove the filthy carpet and replace it with beautiful wood floors. The floors, the FLOORS! We just knew they would entirely alter the identity of the house. They would be light and lovely, they would make the rooms glide, one into another, in graceful lines of organic-modern style. Please god, none of that tappy-sounding cheap Pergo shit. The floors would be the very symbol of the success of our life-altering leap of faith.

Five, six, I don’t know seven? visits to flooring display rooms later, I had cried more than twice, and whipped out my claws on a snippy “flooring and room designer” aka bored, wealthy cougar salesperson who thought she could tell ME about grain variations in that tone of voice. Nuh uh.

So the natural-finish, 5″-wide, engineered maple floors are finally ordered. I have been beaten to near-apathy by indecision, waffling, and second-guesses. The spouse’s knuckles are scraped and bloody from multiple late nights spent crawling around in the attic, tracing and building circuits.

Countertops. Paint chips. We can do this. 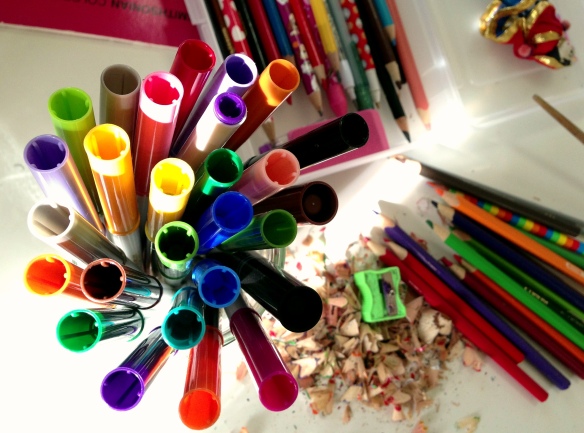 I get nervous, on occasion. Inexplicably jangled, the sound of wind on the windows filling me with sorrow. Jumpy, I expect a knock on the door that never comes. I am dismayed by the choice between toast or an English muffin. There is too much to do, and time is rubbing up against my skin,and did you hear that the earth’s topsoil is going to be entirely depleted in just 60 years?

I’ve learned a few soothing mechanisms. One: organize my kid’s art supplies. It almost always works. Could be the pretty colors, the sense of order and control, the notion that I can set the stage for successful, unbridled storytelling and creation. A tiny slice of God Power. On the first day, She created Mason jars full of washable markers.

I wonder if Norton’s Office Supply is still open. My dad did a lot of cool things for me, including: teaching me to throw a Frisbee; driving to every 7-11 in town to find the one serving Pina Colada Slurpees; letting me tag along to Norton’s. I think he understood my pining desire, the itch in my fingers at the sight of reams of ruled paper, sketch books, binder clips, rulers and triangles, typewriters (and eventually word processing machines), and — The Pens. Oh, the pens. Shelf upon shelf filled with cups filled with pens. Ballpoint, rollerball, felt tip, calligraphy, fountain. Ink, gel, highlighter neon.

The fact that they would let us TEST THE PENS absolutely blew my mind. On a little scrap of paper filled with other customer’s scribbles, I could uncap possibility itself. I could try genesis on for size.